Home prices have continued their seemingly inexorable rise, despite America’s housing market purportedly being in the throes of a correction, a slowdown—whatever you want to call it. It’s defying what many experts predicted and, just maybe, conventional wisdom. 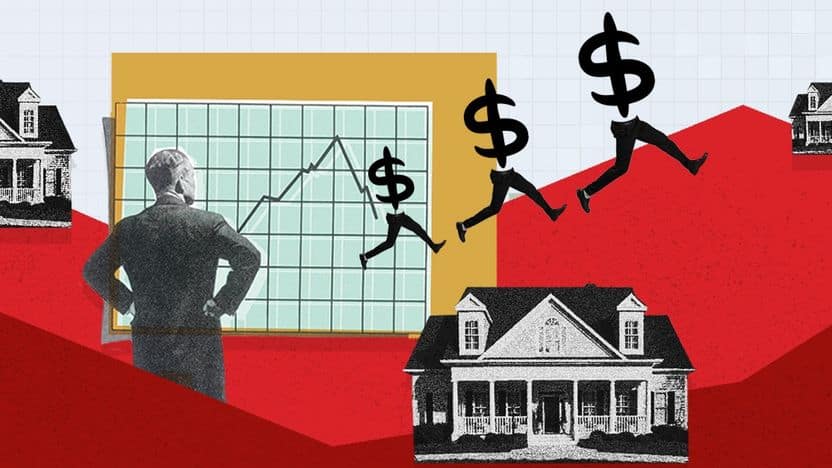 Buyers can’t afford these higher prices on top of higher mortgage interest rates. Deals are falling through. Bidding wars are drying up. Six-figure offers over the asking price are going the way of the dinosaurs. So how is it possible that median home list prices were 15.9% higher in the week ending July 9 than they were a year ago, according to Realtor.com® data?

The disconnect appears to be that home sellers have yet to adjust to this new reality—the one where they can’t slap whatever price they’d like on their properties, sit back, and wait for the bidding wars to commence. Surging mortgage rates have made it impossible for many buyers to afford what they could have just a few months ago.

Meanwhile, record-high home prices are up more than 31% over the past two years, according to Realtor.com June list price data. And they keep rising. Something seems like it needs to give.

And just because sellers are asking for more money, it doesn’t mean they’re getting it. Buyers are negotiating. The number of price reductions on properties doubled in June compared with a year earlier.

Last month, about 11% of builders dropped prices on newly constructed homes, according to building consultancy Zonda. An additional 70% kept them flat compared with May.

“Real estate markets freeze when you see a big change in mortgage rates or the economy,” says Mark Zandi, chief economist at Moody’s Analytics. “Buyers cannot handle these house prices at these mortgage rates,” he says. “The mortgage payment is just too high for most first-time homebuyers. Trade-up buyers aren’t going to trade up because they’re going to have to get a higher mortgage rate.”

Home prices typically spike in the summer. Larger, more expensive homes go up for sale, and families eager to be settled before the kids start school in the fall compete for them. Plus, there are scores of millennials who are reaching the point in their lives when the idea of homeownership becomes more appealing. But now there still aren’t nearly enough homes for sale, or rent, to go around.

However, mortgage rates have spiked from just about 3% a year ago to the mid-5% range. That’s tacked hundreds of dollars a month onto many mortgage payments. Buyers today are faced with mortgage bills 58% higher than they were just one year ago—when prices were also at record highs—on top of higher inflation, rents, and gas prices. That’s rendered many unable to borrow nearly as much for a home anymore and forced many others out of the market.

“A lot of homeowners are still pricing homes based on the market of six months ago,” says George Ratiu, manager of economic research for Realtor.com. “There is a gap between what homeowners are asking and what they’re getting.”

The top question on the minds of homebuyers and sellers alike is whether home prices are going to fall—and if so, by how much.

Many real estate experts anticipate the rate of price growth will slow down as the year goes on. Others predict prices will flatten out as sellers and builders digest the new state of the market and buyers figure out their finances.

Ultimately, exactly what happens to prices will depend largely on individual real estate markets as well as the price ranges the homes are in. Places where prices rose the most during the COVID-19 pandemic are the most likely to come down and have the potential to decrease the most.

These places, such as Austin, TX, Phoenix, AZ and Boise, ID, got juiced by an influx of remote workers and investors who kept prices above what many locals could afford. Now that fewer telecommuters are moving in and with mortgage rates making purchases even more difficult, prices might readjust.

But prices could continue to rise, at least by low single digits, in other parts of the country.

“Housing is so local that it’s hard to paint with a broad brush and say prices will decline. But if you look at the individual ZIP codes as well as certain metros, we will see pricing declines in some of them,” says Bachman. “Home values are no longer realistic for today’s buyers. They can’t afford them.”

The wild card in all of this is a recession. If there’s an economic downturn, then home prices (as well as mortgage rates) are more likely to adjust. Potential buyers who are laid off or are worried about losing their jobs, probably aren’t going to be attending open houses and putting in offers.

However, home prices aren’t expected to drop off a cliff the way they did during the Great Recession.

The reason: The number of investors and aspiring homeowners right now far exceeds the number of properties for sale. Builders have struggled to ramp construction back up since the mid-2000s, and investors have bought many of the properties that used to house homeowners and turned them into rentals. That demand is expected to keep prices high.

“The market is very tight. That will put a proverbial floor under prices,” says Zandi.

Meanwhile, an influx of foreclosures and short sales like what the housing market experienced in the Great Recession doesn’t appear on the horizon. Lenders have become much choosier when doling out mortgages to ensure only the most qualified applicants receive them. Most predatory mortgages have been eliminated. This leaves homeowners in a much better place to weather another downturn.

“To get big declines in prices, you need to see a lot of foreclosure and distressed sales at big discounted prices,” says Moody’s Zandi. “That’s very unlikely because mortgage lenders have been very cautious since the crisis, and they’ve only [mainly] been making plain vanilla 30-year and 15-year fixed-rate loans.”

He anticipates a downturn could push prices down 5% across the board and much more so in overheated markets.

And, in a boon for buyers, mortgage rates typically fall when the economy is hurting. That can “cushion the blow” for many folks struggling to afford real estate, says Zandi.

While the housing correction might not yet be showing up in prices, it’s apparent in the fast-falling number of homes changing hands.

There were about 6.1 million home sales a month in 2021, according to the National Association of Realtors® data. (This doesn’t include sales of newly constructed homes.) In May, the latest month of data available, that fell to about 5.4 million sales a month. That’s a substantial change.

“Home sales have slowed pretty notably. They’re back below their pre-pandemic pace,” says Hale, of Realtor.com. “The housing market is not as hot as it was last year. But compared to any pre-pandemic year, it’s still a pretty hot real estate market.”

One of the side effects of fewer sales is an increase in the inventory of homes on the market, helping to ease the housing shortage. There were 18.7% more homes for sale in June than there were a year ago.

While there aren’t nearly enough properties on the market to ease the housing crunch, more homes for sale is “a reason for buyers to get optimistic,” says Hale.

Clare Trapasso is the deputy news editor of Realtor.com where she writes and edits news and data stories. She previously wrote for a Financial Times publication, the New York Daily News, and the Associated Press. She also taught journalism courses at several New York City colleges.