2021 was certainly a wild ride for real estate, and 2022 may have some new realities in store— including increasing interest rates and competition from foreign investors. 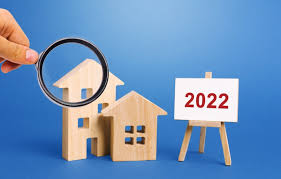 It's no secret that 2021 has been a hot year for the real estate market. Houses are selling at record prices, bidding wars are frequently taking place for the limited inventory available, and it's not unusual for buyers to pay for home purchases entirely in cash.

Though the market appears to be normalizing somewhat as more listings become available, 2022 is poised to have some unique issues and challenges of its own when it comes to real estate sales. Two factors in particular are likely to impact the market in the year ahead:

Here's a closer look at exactly how these factors will impact real estate over the coming 12 months, and your ability to buy or sell a home.

In early November, the Federal Reserve announced plans to taper off its $120 billion bond-buying program and begin winding down its historic effort to stabilize the U.S. economy amid the rollercoaster ride of COVID-19. The decision comes in response to the significant economic rebound the country has experienced in recent months. As federal stimulus measures end, the central bank will be reducing bond purchases by $15 billion each month through January.

"The Federal Reserve's decision to scale back asset purchases represents an attempt to normalize monetary policy, which shifted into crisis mode as the pandemic tightened its grip on the U.S. economy," says Mark Hamrick, senior economic analyst and Washington bureau chief for Bankrate.

That's all well and good, but what does it mean for you, the homebuyer or seller? The end of asset purchases is viewed by many industry experts as a precursor to rising interest rates. And higher mortgage rates mean home buying becomes less affordable for many Americans.

"The Fed's tapering means that less mortgage bonds and treasury debt will be purchased. As a result, mortgage rates will go up," explains Edward Mermelstein, a real estate consultant and founder of One and Only Holdings, a boutique advisory firm catering to investors. "As mortgage rates go up, homes become more expensive to carry if you are financing the purchase."

Heading into 2022, it's likely mortgage rates will increase anywhere from 0.25 to 0.5 percent, which could make a big difference for some potential homebuyers.

"Currently, mortgage rates are between 2.5 percent to 3 percent, so an increase in 0.25 percent would increase your monthly expense by 20 percent, which is significant. Therefore, it is always best to buy now, instead of six months from now," Mermelstein continues.

Interest rate increases are likely to have the most significant impact on the lower end of the market, where a half point can mean the difference between affordability and unaffordability, says Frederick Warburg Peters, CEO of Warburg Realty.

"In the higher ends of the market, increased interest rates will probably put a damper on price increases, but they're unlikely to significantly impact volume," says Warburg Peters.

It's also worth noting that the predicted rate hike is not exactly ideal at a time when home prices were already sky high. According to a Redfin report released in November (which covered the four-week period ending November 14), median home-sale prices had increased 13 percent year over year to $357,881 by last month. They were up 30 percent from the same period in 2019. In addition, asking prices of newly listed homes for the time period covered in the report were up 13 percent from the same time a year ago, and 27 percent from 2019, to a median of $354,725.

"Higher rates will hurt just that much more as real estate prices have climbed by 20 percent or more in the past year," says Melissa Cohn, regional vice president and executive mortgage banker for William Ravels Mortgage. "The combination will be hard on the real estate market. People will still be able to buy—but they will be able to afford less space."

Because the nation's borders were largely closed during much of the pandemic, the housing market was essentially protected from an even bigger run-up in purchase prices that might have been driven by foreign investors dabbling in the market. This reality is poised to shift quickly in the opposite direction as American borders reopen.

Foreign investors have been waiting for almost two years to get back into the U.S. markets, say experts. As flights are added and foreign visa bottlenecks subside, there will be an acceleration of money from abroad flowing into U.S. real estate. It's a development that will benefit some, but not everyone.

"Major markets, such as New York, Miami and Los Angeles, should benefit well from the return of foreign investors. Specifically, sellers in these cities benefit the most because as foreign investors enter the markets, prices increase," adds Mermelstein.

If you're a prospective buyer, however, this run-up may not be ideal, especially when combined with the increased interest rates on the horizon.

"Between increasing mortgage rates and the return of foreign investors, the cost of housing will most certainly get more expensive," says Mermelstein.

Still, not all real estate experts are convinced there are such significant changes ahead, at least not with regard to foreign investors flooding the market come 2022—especially now that a new strain of coronavirus is threatening any return to normalcy.

"With the advent of the Omicron strain of COVID, I think a lot of bets are up in the air, if not off," says Ellen Sykes, a broker for Warburg Realty. "It's unlikely most people anticipated the renewed waves of possible quarantines, shutdowns, and the impact on travel. Consequently, I do not see as great an influx of foreign investors as we used to expect in New York City, and elsewhere in the country. There will always be the larger consortiums and big players coming and going, but the individual investors will be laying low for a while. It is just too difficult at this point."

The experts at Opendoor continue to predict that the spring 2022 homebuying season will see high demand across the United States despite any potential market changes looming. Even with increased interest rates and the possibility of more buying competition from foreign investors, there will still be plenty of options for buyers and sellers alike and the market will continue to move quickly.

"While we don't know what the interest rates will look like, we always recommend to customers that they have a firm understanding of their finances to determine their individual needs," says Nadia Aziz, Opendoor's general manager for mortgages. "Researching options is important in order to find the best financing product that meets your needs. There are many different mortgage products available, including low down payment options, that may help home buyers achieve their dream of home ownership."