It could become a lot more challenging to buy a home in the coming months—or it may have just gotten a whole lot easier. 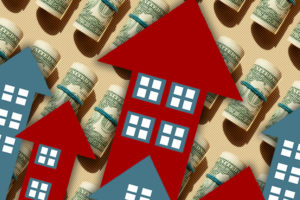 After hitting historic lows, mortgage interest rates are creeping up. The U.S. Federal Reserve’s announcement on Wednesday that it will taper its purchases of bonds and mortgage-backed securities is expected to keep pushing mortgage rates higher.

Those higher rates could indeed make homebuying more expensive for many as their monthly mortgage payments get bigger. But in this paradigm-breaking market, higher rates could also prove to be a boon for buyers in some markets by keeping prices in check and lessening competition. That could make homebuying less expensive if buyers aren’t spending as much on their homes and engaging in crazy bidding wars—possibly a welcome lifeline for many first-time buyers who’ve been barred from homeownership by record-high prices.

Confused? Well, today’s COVID-19-fueled housing market is like nothing the U.S. has seen before. There is a dire housing shortage, builders haven’t been able to ramp up, and a massive generation of millennials is champing at the bit to become homeowners. And so depending on a variety of factors, these rising rates could be either a blessing or a curse for prospective homebuyers.

How can you tell which side of the equation you’ll wind up on?

For some, higher interest rates are a double whammy of bad news. Home prices in most competitive housing markets will still remain high. And after buyers purchase homes, they will be paying more in interest. So buying a home will be more expensive all around.

“It’s going to be less affordable a year from now than where we are today,” warns Leonard Kiefer. He is the deputy chief economist at Freddie Mac, the government-backed organization that helps support the U.S. housing market.

Low rates, which bottomed out at just 2.65% in the first week of January for 30-year fixed-rate loans, helped to fuel the explosion in home prices in the early days of the coronavirus pandemic. Homes could cost more, while monthly mortgage payments stay the same as they were a few years ago when rates were higher.

Rates averaged 3.14% in the week ending Oct. 28, according to Freddie Mac data.

But, historically speaking, rates even in the 3% range are still very low. It’s less than the current rate of inflation (5.4% in September, according to the Consumer Price Index). This means that banks aren’t even charging enough in interest to make up for the value that money loses over time due to inflation. With such low rates, there will still be plenty of buyers who want to jump in on a mortgage.

Plus, the majority of millennials are now in their 30s, the prime age to buy a first home. And they are the largest demographic group in the country. But instead of more housing going up to accommodate them, the number of available homes has shrunk with construction declining and investors turning single-family homes into rentals.

That will keep competition high as will the dearth of homes for sale.

“We are living in an unprecedented housing market,” says Jodi Hall, president of Nationwide Mortgage Bankers, a lender. “Housing prices will continue to rise because of the shortage of housing, specifically homes for first-time homebuyers.”

Other experts take a sunnier view. They argue that higher mortgage rates will finally cool down some of the cutthroat competition over housing and—eventually—help push down sale prices.

“Prospective homebuyers should actually be praying for rates to start creeping up,” says Katie Gatti, a personal finance consultant and founder of the Money with Katie blog.

The big picture suggests price increases will at least have to slow down. Median incomes have barely grown since 2000—while housing prices have skyrocketed. That means “price growth will almost certainly have to slow,” says Gatti. There just aren’t enough people who can afford current prices.

“As the prices get higher, that potential buyer pool shrinks,” says Gatti. “Simply put, our economy—and the average income— can’t support the cost of a home in most cities.”

Ultimately, homebuyers may still be out of luck if they want to see home prices actually go down.

“With how hot the market is, the rising rates will only slightly affect housing prices,” says Khari Washington, owner of 1st United Realty and Mortgage in Riverside, CA.

Price growth may slow down, meaning prices are still increasing, but at a more gradual, manageable pace. Offers over asking could also decrease, which would help buyers’ bottom lines.

Why mortgage rates matter to homebuyers

Mortgage rates aren’t just an esoteric statistic about the real estate industry. For most Americans, they determine how much it costs to own a home. Rates have been falling in the U.S. since the1980s. But when the pandemic hit, they became almost absurdly low thanks, in part, to the Federal Reserve’s purchases of mortgage-backed securities.

When lenders make mortgages, they typically bundle up the loans into these securities, otherwise known as mortgage bonds, and sell them on the secondary market to investors. This frees up money to make new loans.

When the pandemic struck the nation in March 2020, the Fed announced it would buy bonds to help stabilize the economy and the housing market. That led to a surge in demand, which pushed mortgage interest rates down to record lows. When the bond market is strong, mortgage rates fall.

As a result of these early pandemic moves, the average interest rate for a 30-year fixed-rate mortgage fell below 3% for the first time in July 2020.

Now that the economy has rebounded and unemployment has dropped, the Fed is diminishing its bond purchases. This weakening bond market should lead to rising mortgage rates.

Mortgage rates aren’t the only big factor driving the housing market. The main problem is a lack of homes for sale. Historically low rates encouraged more people to go out and buy a house. But the number of homes for sale, already well below what was needed, dried up even further. And the residential construction industry hasn’t caught up.

“Is there going to be relief? Probably not for some time,” says Freddie Mac’s Kiefer. “Fundamentally, the issue for the housing market is lack of supply. We just haven’t built a lot.”

Sharon Lurye is a freelance journalist based in New Orleans. She graduated from Columbia Journalism School in 2018.