Love it or hate it, our annual ritual of early March – daylight saving time – is coming this weekend. 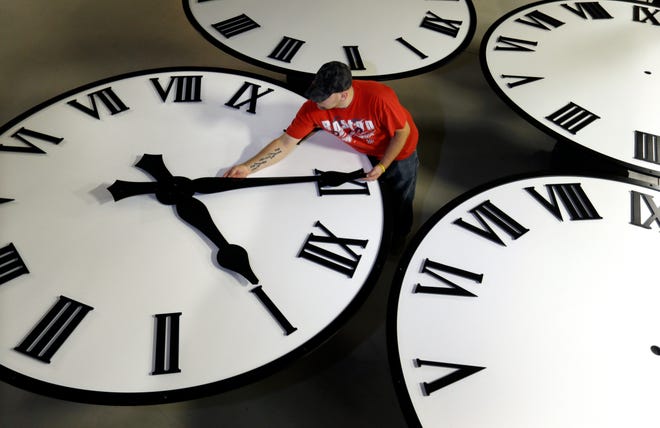 Since most of our computers, smartphones and DVRs do it automatically, it's not as much of a chore as it used to be. Unless you have smart appliances, microwaves and ovens are on the short list of household items that would need a manual adjustment.

Here are some questions answered about daylight saving time.

Do we gain or lose an hour?

We all lose an hour of sleep on Sunday when going to DST, as the day is only 23 hours long. Starting Sunday, that one hour of daylight is basically shifted from morning to evening as daylight saving time begins.

We don't go back to standard time until Sunday, Nov. 1.

Who's in charge of time?

Surprisingly, the Department of Transportation is in charge of daylight saving time and all time zones in the U.S. "The oversight of time zones was assigned to DOT because time standards are important for many modes of transportation," according to the department's website.

Why do we observe daylight saving time?

The DOT says daylight saving is observed because it saves energy, saves lives by preventing traffic accidents and reduces crime.

The agency also says people tend to spend more time outside during daylight saving time, meaning they run household appliances and lights less during those eight months. Also, the DOT says, it prevents traffic incidents because people are driving around more during the light hours. It also is a crime deterrent, DOT says, because people are out during the daylight and not at night, "when more crime occurs."

What are the downsides to DST?

Not everyone agrees it offers energy-saving benefits, however. Some studies report the time switch saves energy on lighting but is surpassed by increases in heating and air conditioning. It can also mess with our sleep patterns, at least temporarily.

Other health consequences, according to studies and research, include increased headaches, heart attacks and depression.

Arizona (with the exception of the Navajo Nation), Hawaii, American Samoa, Guam, Puerto Rico and the U.S. Virgin Islands don't spring forward or fall back.

Are there states that would like to dump daylight saving time?

Yes. In Florida, the Sunshine Protection Act has passed the state Legislature but still needs to be approved by Congress. Other states where bills have been passed include Washington, California and Oregon.

How did daylight saving get its start?

When did the U.S. officially enact daylight saving time?

DST became a national standard in the U.S. in 1966 with the passage of the Uniform Time Act. States either have to change the clocks at a specified time or stick with standard time throughout the year.

In 2007, the federal government expanded daylight saving time in order to reduce energy consumption. The law now specifies that daylight time applies from 2 a.m. on the second Sunday of March until 2 a.m. on the first Sunday of November

Daylight saving time now accounts for about 65% of the year.

How many countries observe DST?

More than 70. It's known as summer time in some countries, including the United Kingdom and in Europe. No one is sure just how much daylight is saved, globally, each year, though physics indicates none.

Is it daylight saving or savings time?