Over a century ago, New England was intertwined by dozens of railroad lines, competing with

each other to transfer people and items to and from towns. In 1868 a railroad was built among lakes,

ponds, streams, and woods, with a plan to incorporate another way of travel out of remote Wolfeboro.

Before the railroad was built, most of the visitors traveled by train only being able to arrive as far as

Alton Bay or Weirs, then would continue by a steamer to Wolfeboro. The addition of the railroad

One hundred and fifty years later the railroad is still occupied and running but in an alternative way. Laid

out within and alongside the historical tracks, gravel paths were assembled to bring the once running 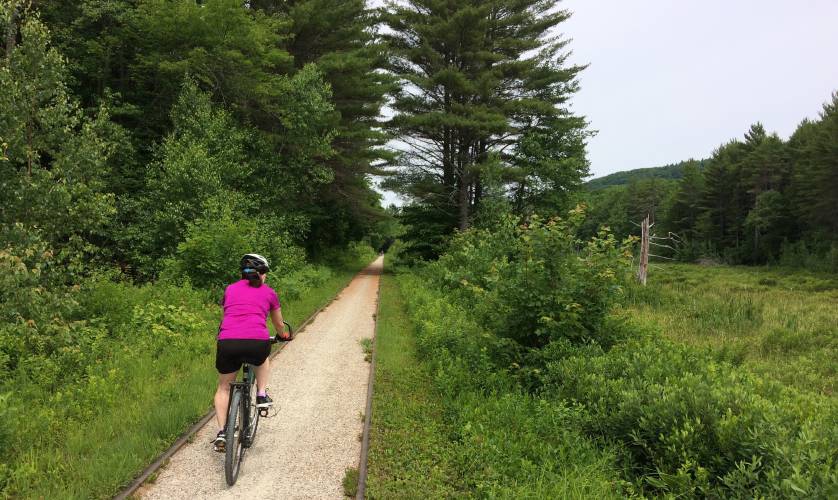 enthusiasts, and athletes of all ages visit and incorporate the rail-trail into their daily routines. The

Cotton Valley Rail-Trail supports many hobbies and activity’s throughout all four seasons. If you’re tough

skiing, mushing, snowshoeing, or snowmobiling. As soon as the rail-trail thaws and summer approaches

bikers, runners, walkers, and wildlife watchers populate the trail while discovering the beautiful

landscape along the way.

Turntable Park. Along the first half of the rail-trail starting in downtown Wolfeboro, you will go past Back

control sailboat regatta’s. You will see breathtaking views of the mountains on the waters horizon as you

cross Lake Wentworth that will make you want to stop to admire the vista’s beauty. You will come

across Albee Beach, Wolfeboro’s public beach where stopping for a swim, bathroom break, or a seat on

one of their picnic benches in the shade may be convenient. Continuing on the trail you’ll find Fernald

Crossing, another train station that’s been preserved by the members of the Cotton Valley Rail-Trail

Club. The club is joined by local railroad enthusiasts in the town who came together in 1992 to pursue

their hobby in railway motor cars. The club not only runs these motor cars on the railroad, but also have

continue operating the cars, so don’t be alarmed if you hear a train coming!

woodland and wildlife. The tranquil setting of the forest and reduced business creates a venturesome

atmosphere for the remainder of the trail. Among the trees you may spot single-track trails just after

mountain biking. Following the trails heavily wooded path may provide an opportunity to encounter a

verity of New Hampshire wildlife along the way. Brooks, ponds, and marches throughout the trail

provide homes and resources for the wild animals. If you’re lucky you may occasionally spot beavers

or geese. If you’re on the trail early in the morning theirs a likelihood of a passing glance at deer, black

bear, fox, or moose before dashing off into the woods. If you feel like taking a break or resting by the

scenic wetlands along the rail trail, benches and occasional picnic benches are provided throughout the

trail close to every mile.

travel towards Sanbornville. You’ll continue to wind you’re way through more green and quite

woodland. At the end of the trail you’ll reach Turntable Park where the historical rail-road turn table still

remains. Once used as a device for turning locomotives so they could be moved back in the direction

from which they came from, a great destination to end you’re twelve mile trip.

a ribbon cutting. The final two miles marked the completion of the Cotton Valley Rail-Trail and joined

two trails together to be used as one. The trail originally connected from its occurring location in Back

completed the two miles of rail-trail from Turntable Park to Clark Road in Brookfield, NH. The

and organizations the rail-trail wouldn’t be the beautiful trail it is today and for generations to come.

The Cotton Valley Rail-Trail has a lot to provide. From the fantastic glimpses of railroad history

to its mountainous backdrops, lakes, countless ponds, and wildlife, the rail-trail provides you with the

whole Lakes Region experience. Many visitors from around the world have come to Wolfeboro and

experienced this trail and what it has to offer. Whether you’re spending you’re day on the trail, going on

an adventure, or commuting to work, you’ll find the Cotton Valley Rail-Trail has a friendly charm and

clean attractiveness creating a sense of community no matter where you came from. The rail-trail has

carried and navigated passengers long-ago, today, and will continue doing so for many years to come.